The Town Meeting Vote in the 21st Century

Since the earliest days, the annual Town Meeting in Uxbridge, Massachusetts has been rife with passion when questions are put on the table relating to the public funding of schools. In 1732, the town had to hold two votes before it could set aside the funds for a school.

Speeding up the Processes Without Trampling on Citizens Sensitivities

The first vote failed to pass because the resolution called for “a school-dame be secured for seven or eight months in the year.” The second vote only passed when the funding resolution was changed to call for “having a school master in town.”

The question of a teacher’s gender no longer comes up Uxbridge Town Meetings, but questions about school funding still inspire partisan passions. Indeed, when questions about raising money to build a new high school came up in the early 2000s, nearly 900 residents showed up at the annual Town Meeting – more than four times the usual turnout – and the high attendance number continued for years while these questions continued to be debated.

In those early years the 21st century, Uxbridge Town Meeting was still held in the manner of a traditional New England Town Meeting, where attendees are handed colored cards to hold up when voting for or against an issue. Uxbridge Town Meeting moderators have always been empowered to determine whether a motion passes based which set of colored cards dominates. Yet during those contentious Town Meetings about school funding, it was impossible for any group of residents to accept that their side had not prevailed, and the decisions of the Town Meeting moderators were routinely overruled on the spot. The side ostensibly losing in the vote would immediately call for a hand-recount of the colored cards, which would cause Town Meeting business to grind to a halt as all 900 cards were painstakingly counted. Then, as was frequently the case, when the hand recounts did not go the way that either faction wanted, people would question the validity of the recount and call for a new vote, this time using a secret ballot – which also had to be hand counted.

“These issues provoked a lot of anxiety and angst in the community,” says Kelly Cote, CMC, the Uxbridge Town Clerk. “Seniors on fixed incomes didn’t want to see their taxes go up, while young families in the community really wanted a new high school for their kids. It made for a really messy Town Meeting, and meetings that should have lasted a single night could drag on for two and three days.”

Cote talked to the Town Managers in Uxbridge and suggested that the town look into an electronic audience response system (ARS). Such a system would ensure an accurate vote count right from the start – something that waving colored cards never allowed when the vote appeared to be close. It would also enable an accurate count instantly, which would eliminate the multi-hour hand count that contested Town Meeting votes typically demanded. Finally, an ARS system that could be configured to capture votes anonymously could help preserve the civility of Town Meetings. Residents would not be scared to vote the way they wanted to vote, as some residents seemed to be when they were asked to hold their cards in the air and be seen by their neighbors to take an unpopular position.

Cote researched different ARS systems and received four systems to test. Two systems soon fell by the wayside, as the providers offered only a leasing model and Cote had a limited budget and wanted a system that Uxbridge could purchase outright. Cote received demo systems from the remaining two providers and tried them both in smaller committee meeting venues to see how well they worked and to gauge the audience’s response to the ARS systems themselves.

“From the perspective of the people trying the systems, it came down to the keypads,” says Cote. “Everyone preferred the keypad from Meridia Interactive, which has a screen that confirms both how you voted and confirms that your vote was counted. The other ARS system keypad didn’t have a screen and didn’t provide this feedback, which was very important to our residents. They really wanted to know that the system was accurately capturing their votes.” 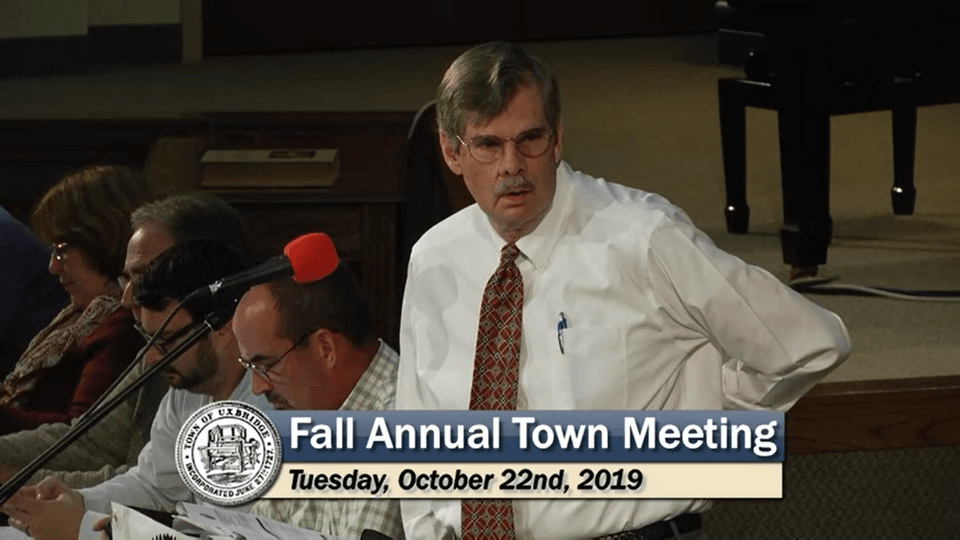 Based on the feedback from individuals who tried the Meridia EZ-VOTE system at the smaller committee meetings, Uxbridge purchased the EZ-VOTE system from Meridia and put a plan in place to use it at the next Town Meeting. Cote prepared a five-slide PowerPoint presentation to show residents how the keypads worked and to show them how their votes would be captured and counted. Cote even had attendees cast a test vote at the beginning of the meeting so they could see how it would work and how quickly EZ-VOTE could present the final results in the PowerPoint presentation.

“That went really well,” says Cote. “Everybody loved it. There was not a single negative comment.”

The Business Without the Drama

What transpired during the remainder of the evening showed the residents of Uxbridge a new way of conducting business at Town Meeting. The same difficult issues about school funding came up, but this time all the attendees voted anonymously through the EZ-VOTE keypads. There was no waving of cards, no uncertainty about the strength of the prevailing side, no worries about what one’s neighbors might think. The votes were captured – instantly, accurately, and without acrimony – and within minutes the residents of Uxbridge learned that they had, after 16 years of contentious Town Meetings, voted to fund the construction of a new high school.

There were no calls for recounts, as everyone could see the exact vote counts on the screen. There were no further calls for a secret ballot, because all the attendees had, as a consequence of the anonymity enabled by EZ-VOTE, just voted secretly.

“We thought we knew where the numbers would end up,” says Cote, “just because we knew the residents and their feelings. But many of the people we spoke to afterwards we still very relieved that we had used this process to capture their votes. They were able to vote their feelings and didn’t have to feel guilty about it. There was no animosity between people that night, which made for a great transition out of the meeting at the end of the evening.”

The fact that the EZ-VOTE system itself was counting the votes – rather than a town manager or meeting moderator – went long way towards facilitating a civil resolution to the passions that had reigned. “This was the most accurate vote count that had ever been done,” says Cote, “and it was accurate in multiple dimensions. We had an exact count that no one disputed, but more than that we had a count that accurately reflected people’s feelings. Even if their side didn’t win, people knew that they had been heard, and that was positive.”

The enthusiastic response to ARS at annual Uxbridge Town Meeting has prompted Cote to incorporate the Meridia EZ-VOTE system into many of the meetings that take place throughout the year. All the questions to be put to a vote are put into the ARS system in advance of the meeting, and Cote has learned to modify the PowerPoint deck on the fly to incorporate changes that are proposed in real time. “We use EZ-VOTE for all questions, not just the ones that one person or another might feel are important. That way, we remove any doubt about the outcome. The vote is captured in EZ-VOTE. And we never have to hold a secret ballot any more. Every vote is effectively a secret vote.”

“As town clerk” Cote continues, “EZ-VOTE makes my job a lot easier. I have to record the minutes, but now I don’t have to keep an eye on the moderator counting the votes. I can see the exact results of a vote right here in front of me. I can back up my minutes with details from the slide. It’s a far more accurate way to do this then we’ve ever had before.”