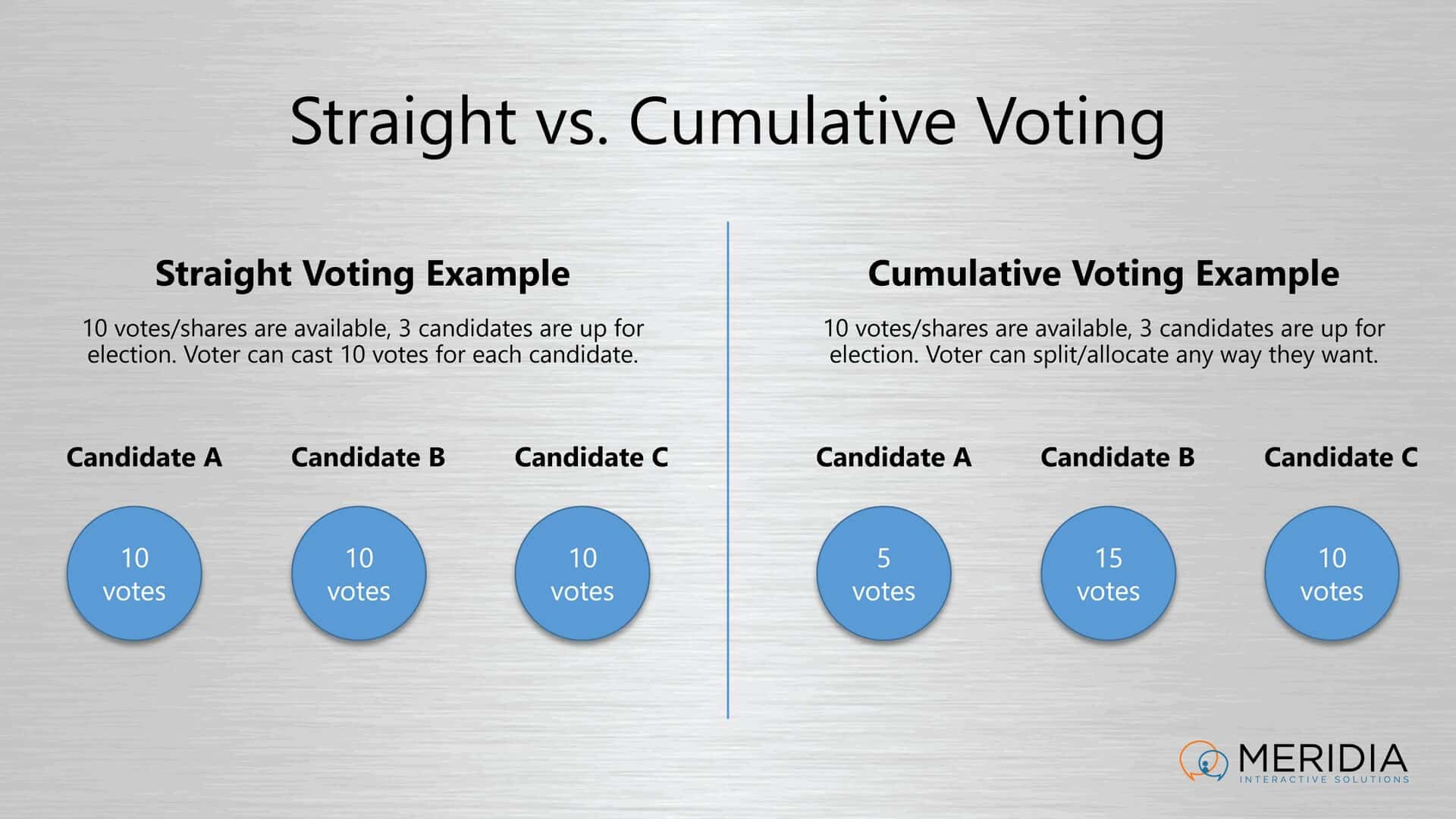 Both cumulative voting and straight voting are accepted ways to conduct the nomination and election of board members, but the different outcomes they produce could result in different people becoming involved in the management of a cooperative.

One question that frequently challenges the cooperative principles that should be guiding a housing cooperative is the question of cumulative voting vs. straight voting. Both cumulative voting and straight voting are accepted ways to conduct the nomination and election of board members, but the different outcomes they produce could result in different people becoming involved in the management of a cooperative. Both voting systems can pose vote counting challenges that are best resolved through the use of electronic or online voting systems.

The Difference Between Straight and Cumulative Voting

Let’s start with the basic question: What is the difference between straight and cumulative voting? In a straight voting system, a shareholder votes the full value of their shares in an undivided manner. If there are three co-op board seats open, a co-op owner with 1,000 voting shares can cast 1,000 votes for each of three candidates. They’re effectively casting 3,000 votes, but it’s 1,000 votes each for each of three candidates.
In a cumulative voting system, that same owner voting in an election to fill three seats would still have 3,000 effective votes, but the owner can divide those votes as he or she wishes. If they owner has a candidate they really want to see on the board, that owner might put 2,000 votes against the one candidate and 500 votes against each of two others (whom the owner might think are likely to win even without more votes).

The Power of Cumulative Voting

Cumulative voting, clearly, can create dramatically different outcomes. Because it is not uncommon for different owners in a co-op building to have different numbers of voting shares – based on the size of their unit, it’s location, and other factors – the cumulative approach makes it possible for owners with fewer shares to gain a little more power when it comes to the management of a cooperative. If several owners band together, their ability to tip an election towards a candidate that might not be the first choice of the largest owners grows stronger.
Of course, keeping track of the votes in a cumulative voting system becomes a bit more challenging, too. That’s where an electronic or online voting system can make conducting the election of officers easier, more accurate, and more transparent. With an electronic voting system, the software keep track of how many votes each owner has and how those votes are distributed. An electronic voting solution can reduce the amount of time it takes to conduct a complete vote and ensures that the vote count is accurate and complete.